Our guy did really well at the doctor. Kellan weighed in above the 97th percentile at 13 pounds, 12 ounces and measured 23-inches long. He didn’t enjoy his shots (three) and was pretty crabby and sleepy for the rest of the day, but was back to his sweet self by the next day. The doctor tsk-tsked mommy and daddy though. She reminded us that allowing himself to sleep all over the place at night was setting us up for a major struggle if we didn’t get him used to his crib.

Red faced, we pulled it together the past two nights and even gave swaddling another shot. Guess what. He slept in his crib. We swaddled him, but left his legs loose and put him in his crib at 9 last night. He only woke up twice to eat! First at 1:30, then again at 4:30, and he woke up this morning at 6:45. Crazy. He’s only eating like 11 or 12 times a day now. It’s awesome.

Kellan has so much personality, already cooing and grinning at us. He’s really strong and can sit in bumbo for a minute or two and push up from his belly. And as an added bonus, his baby acne is clearing up!

Seriously, he just keeps getting cuter and cuter!

Last but not least, there is no safe place left in our house. Poor kittens.

We’ve streamlined our cooking these days. In need of a quick dessert, we stumbled upon this quick and easy treat. A twist on the classic Rice Krispies Treats…

Melt butter and candy bars over low heat until combined and smooth. Once melted, remove from heat and add Rice Krispies. Blend then spread into well greased 13″x9″ pan. Spread melted chocolate over top of treats and refrigerate until chocolate is firm.

Yeah, so time flies when you’re having fun. We’re still trucking along down here. Sorry for the lack of updates. The new guy keeps getting bigger and bigger (and better and better). And big brother is more and more fun each day. They definitely keep us on our toes. 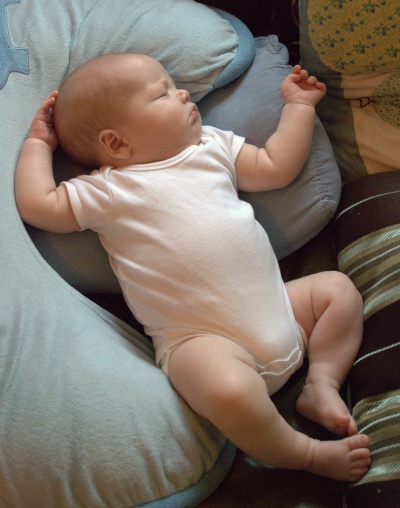 He’s ginormous. Seriously, the little meatball is already wearing 3-6 month clothes. It’s amazing. He still has sleepy days, but also has days during which he’s awake for 2 hours in a row between naps. We still nurse A LOT, but it’s getting a little less frequent – 13 times a day instead of 15. Doesn’t sound like a big difference, but those 2 missing feeds were usually between 11PM and 6AM, so it is a big deal.

Just look at the difference in 4 weeks. He’s already too big to snuggle in boppy.

Kellan is a real snuggler. He insists on being held most of the time. So the Maya sling and Infantino wrap and tie are getting daily use. B and I are also quite a bit more relaxed (and exhausted) this time around, so unlike big brother Liam, Kellan spends a significant portion of the night in bed with mommy and daddy. You wouldn’t think that walking the 6 feet between our bed and Kellan’s crib would mean much, but when you’re as bad at falling asleep as I am, it’s a difference of being awake for 15 minutes every 2-3 hours and being awake an hour every 2-3 hours.

We have a 2 month well check next week. I promise I’ll post the stats. He has to get his first round of shots this time. Yuck.

And now for the old baby.

Liam is a wild man. He is hilarious and makes me a crazy person. He’s alternately sweet and stubborn, imaginative and irritating, goofy and god-awful, and independent and INDEPENDENT. And the energy. Oh, wow! He never stops, notforonesecond. Doesn’t he realize that mommy is old and tired? There aren’t enough Pixy Stix in the world to help me keep up. Thai iced coffee does help a little…

Liam’s stringing words together and loves to pretend. Some days he’s a lion, others a dog, occasionally a snake or a frog. We’re taking advantage of this and brainwashing him introducing him to the character he’ll be for Halloween. He seems to be enjoying it. He recognizes most letters of the alphabet and a few numbers and can count to two (he holds up both index fingers – it’s terribly cute).

He also still adores his baby. Last week while I was holding Kellan, Liam marched up to us and shouted “My baby!” It was pretty funny, if more than a little rude. “Mine” is the word of the day (month). Everything is “mine.” Hopefully it’s just a phase and we’re not really raising the most selfish child in history… Is this the “terrible” part of the twos?